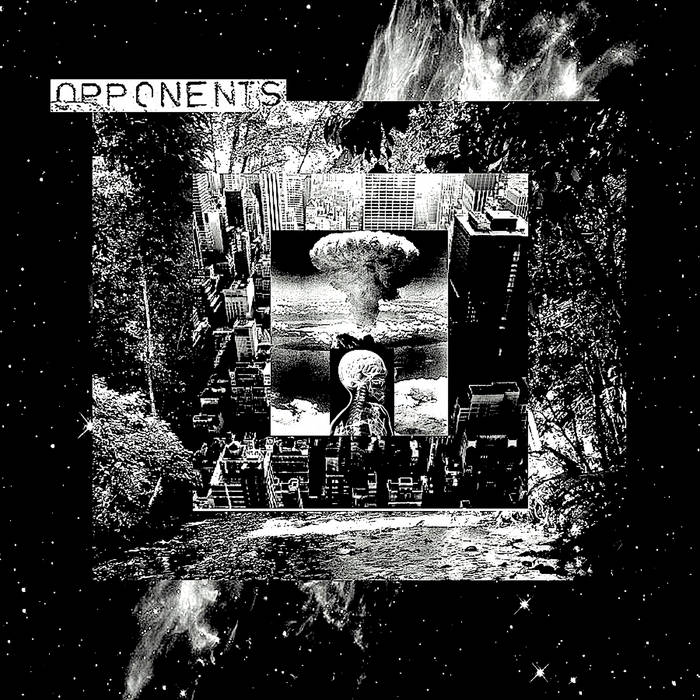 This is the music of the apocalypse—environmental collapse, leading to glorious mutations, and striking new powers amongst the populace. The beats and polluted aether of 80s Sheffield come to Brooklyn—danceable, atonal, melodic, catchy, and very much not safe. As we adapt to the shower of toxins, we are made stronger, less fearful. A giant leap upward for OPPONENTS, and their first slab of vinyl, presents the song form with greater boldness than any previous release, yet with the same discretion that has marked OPPONENTS' progression, into this, a new kind of sci-fi music for a wasted millennium, after the crisis. Pop? Only if you're making popular music for the dried, smoking husk of the "what now?" urban metropolis, which OPPONENTS are. Songs that will dance in your head as you envision Ballardian landscapes, concrete islands where the infinite galaxy meets the gritty Brooklyn sidewalk. Mashroom-headed sleeve by Joshua Slusher; silkscreen-printed by Seizure Palace. Six tracks; a special edition of 166. Contact solitary@prisontatt.com for wholesale pricing and other inquiries.

Featuring interviews with the mighty Hiatus Kaiyote and genre-busting L'Rain.